Some examples of lists are:

List items can also have attributes attached to them (like if a product is active or discontinued). The attributes are represented as columns in the list view. Attributes are mostly used to control the formulas or to logically connect items from two different lists.

Lists can be found under the 'Lists' menu. Select a list from the menu to edit its items.

Each item has a unique identifier (first column). It can be used to reference the item from a formula or to identify it during data import. The identifier can be changed. Latin letters, numbers, underscore(_) are allowed. Items's caption (second column) is an optional text which describes the item.

Measure (metrics, fact or position) is a quantity which is relevant for your model such as number of units sold, revenue or costs. Measures are represented as a special list inside the system.

Click the the Lists → Measures menu item to access the measures screen. Note: Measures list can be renamed, but it will always be displayed as the first list in the menu. Adding or removing measures works exactly the same way as adding/removing other list items.

Multidimensional worksheets (or cubes) are used to store the bulk data of the model. Worksheets also contain formulas and formatting rules. 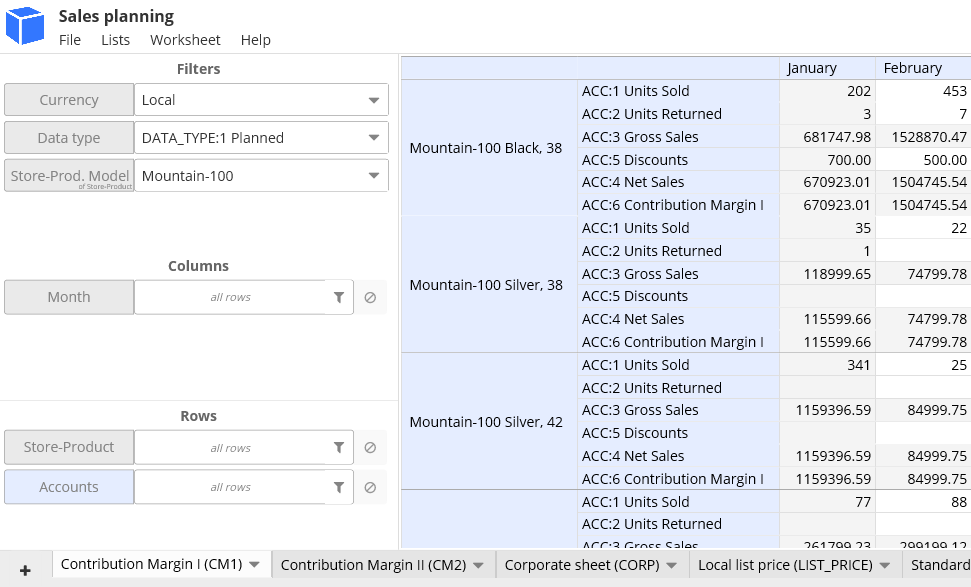 Dimensions of a worksheet can be displayed as rows, columns or filters. The assignment can be changed by dragging and dropping a dimension to a different area of the panel in the right part of the main screen.

The filter icon on row and column dimensions can be used to further reduce the visible part of the worksheet.

Formulas are used to compute cells of a worksheet based on the content of other cells. Right click on a cell and choose New formula menu item to create a new formula. The formula editor overlay will appear. 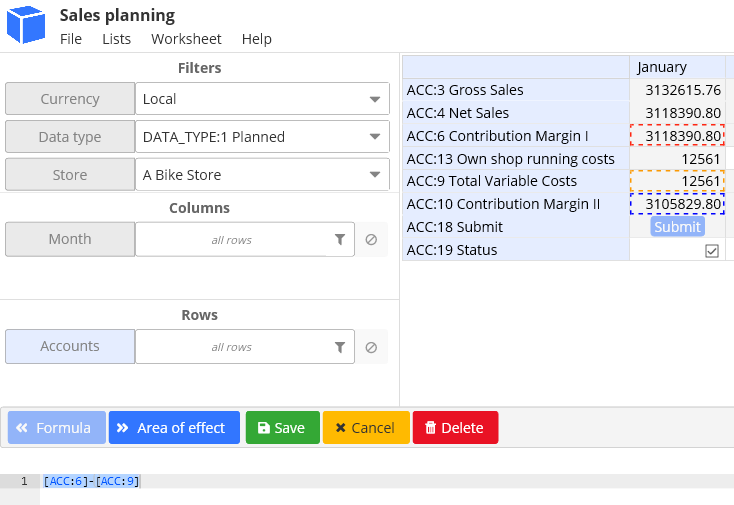 The formula syntax is quite similar to common spreadsheet application with the exception of two new concepts:

A major drawback of a common spreadsheet is the necessity to copy formulas as new cells are added. This happends because formulas are normally bound to individual cells. We remove this limitation by attaching the formulas to worksheets instead. We use the area of effect concept to express the part of a worksheet a formula is applied to. The 'area of effect' defines a set of list items a formula is applied to for each dimension of a worksheet. The area of effect can be expressed in a flexible way, so that a formula can be applied to all list items, to a fixed subset, to all but selected items or to items with certain attributes. This way a formula will continue to do its job after new list items are added to lists.

The unique cell reference syntax makes formulas very powerful and durable. The easies way to add a cell reference is to select a cell range with a mouse while the formula editor is active. The reference will be added to the current cursor position. While this may be enough for most of the basic cases it is important to understand how cell references work.

A cell reference is a comma separated list of directives which is enclosed in square brackets. Each directive defines the targeted list item(s) along a single dimension. There are two types of directives: static and dynamic.

Static directives have the syntax <list id:list item id> or <list id:(list item id1, list item id2, ...)> and reference a fixed set of list items. Reference A:3 for example will always refer to the item with the id 3 inside the list A.

Below is the complete list of the functions for dynamic references:

Cells from a different worksheet can be referenced by prepending a cell reference with the worksheets identifier (like: W2.[A:3]). 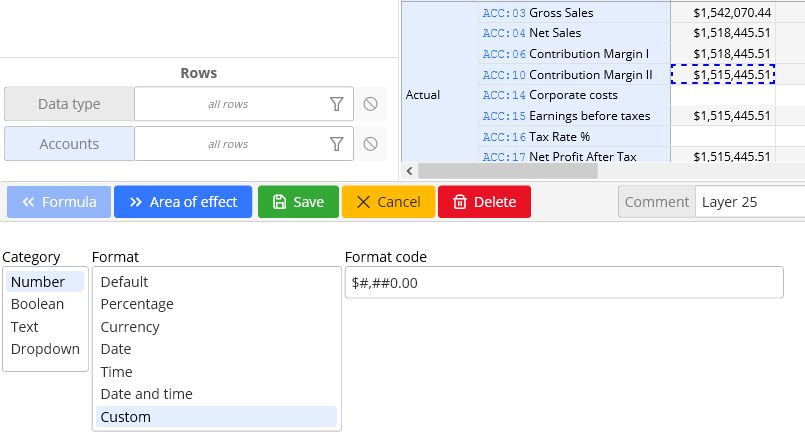 Possible cell formats are decimal numbers, date and time values, boolean values (checkbox), dropdowns (with list items as options), sliders and buttons. Cell format can either be defined statically, by selecting a respective option in a listbox or dynamically with a formula using by checking the dynamic checkbox on the right side of the screen. A dynamic formatting formula must return o format object, which can be created using one the format...() functions. Some format types (like buttons and sliders) are only available through the respective format functions (like formatbutton(...)). See the functions docs for more information on formatting functions.

More information on custom format strings for number and dates can be found under the following links:

Cell visibility rules can either be static (just always hide the area) or dynamic. Dynamic rules must return a number which is interpreted as follows: 1 - hide cell content, 2 - make the cell read only, 3 - make the cell editable, 4 - do not change cell access